A decadent Dutch Baby Puff Pancake is made with milk, eggs, sugar, flour, and vanilla, and baked in a cast iron skillet in the oven until it puffs up and becomes a golden brown. A delicious and easy breakfast dish! 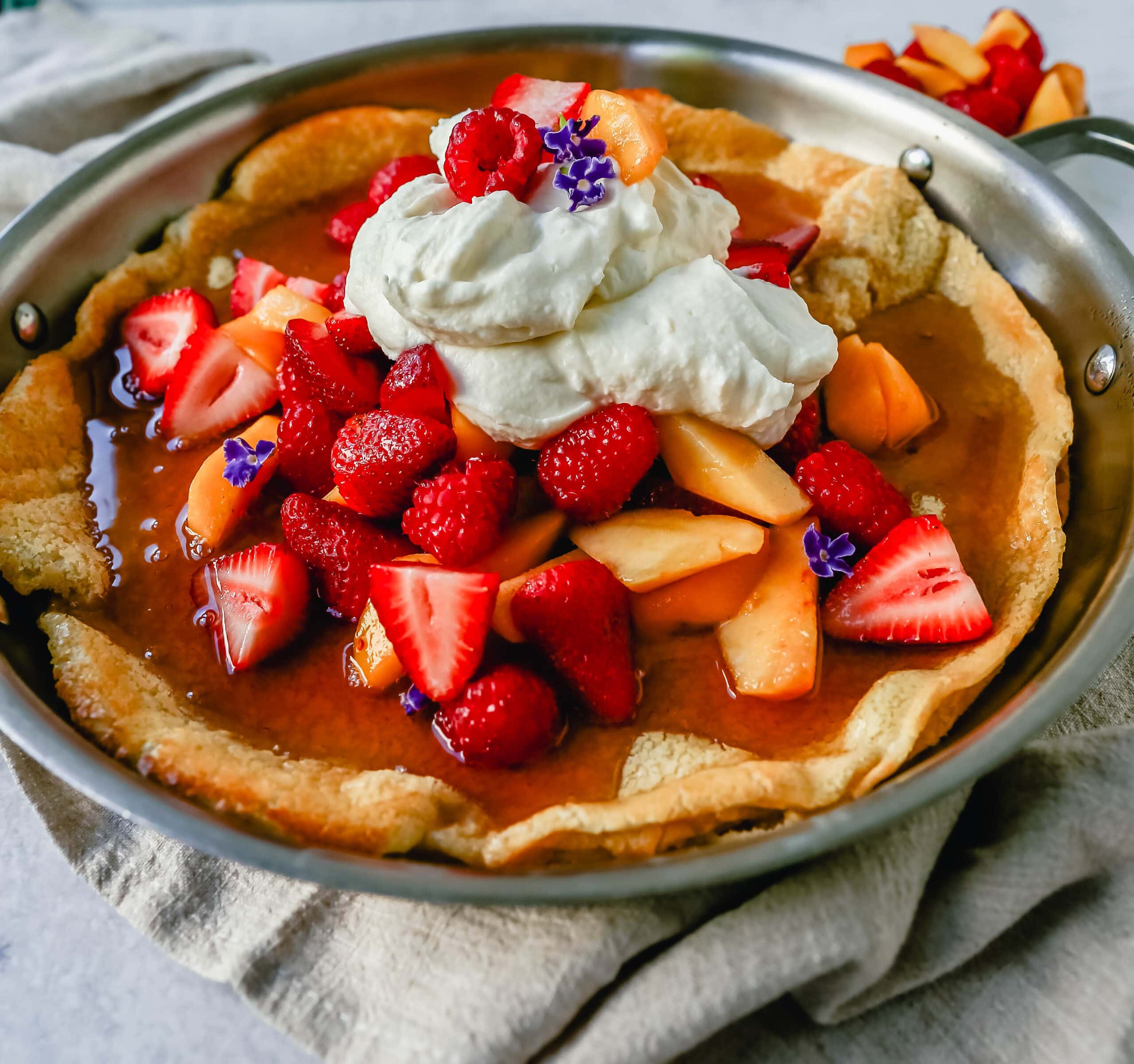 A baked vanilla custard-like pancake that miraculously puffs up when baked in the oven. It has a creamy souffle texture and makes whipping up breakfast on the weekend so easy!

It's Sunday morning and I hear my kids scrambling around downstairs looking for something to eat.

I know what is coming next.

They run through my bedroom door and ask THE question, "Mom, what's for breakfast?" My eyes are barely open. I am pretty sure I am still half asleep and I really just want to crawl back into bed and hide under the covers.

But I know they aren't looking for cold cereal! They want something warm, comforting, and most importantly homemade.

This is it!  Dutch Baby Puff Pancake (also known as German Pancakes) is my go-to breakfast for those lazy Sunday mornings before we rush off to church. It's always number one on their wish list when they want something covered in a massive amount of powdered sugar and syrup. 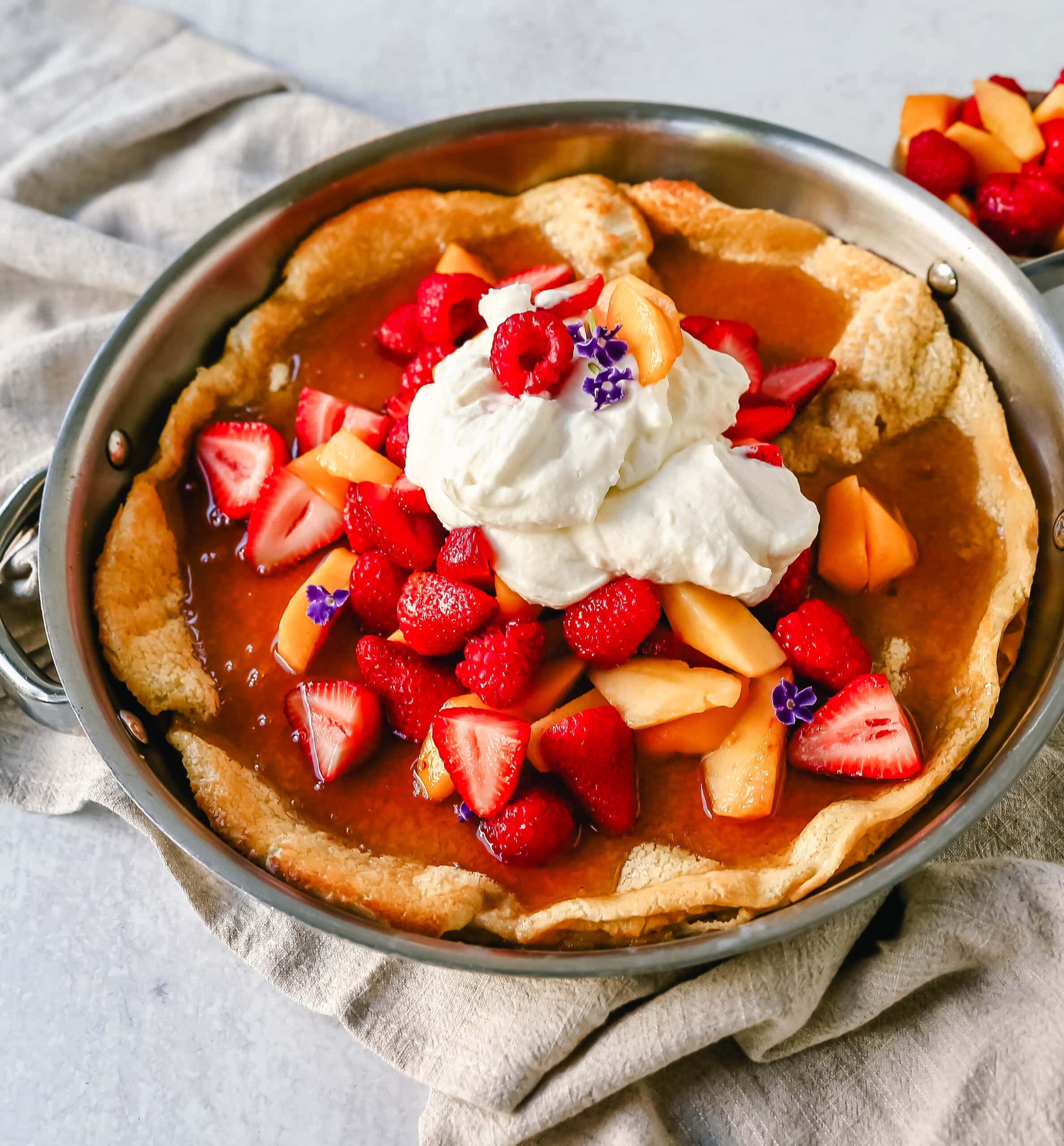 What is a Dutch Baby Pancake?

A Dutch baby pancake, sometimes called a German pancake can be considered to be a large popover.

Dutch babies are baked in the oven, rather than fried. They are generally thicker than most pancakes and rise in the oven like a souffle and call for no leavening agents, like baking powder.

A Dutch Baby is baked in a hot cast iron skillet or metal pan and deflates soon after being removed from the oven. A Dutch Baby Pancake is generally served with freshly squeezed lemon, butter, powdered sugar, fresh fruit, or syrup. 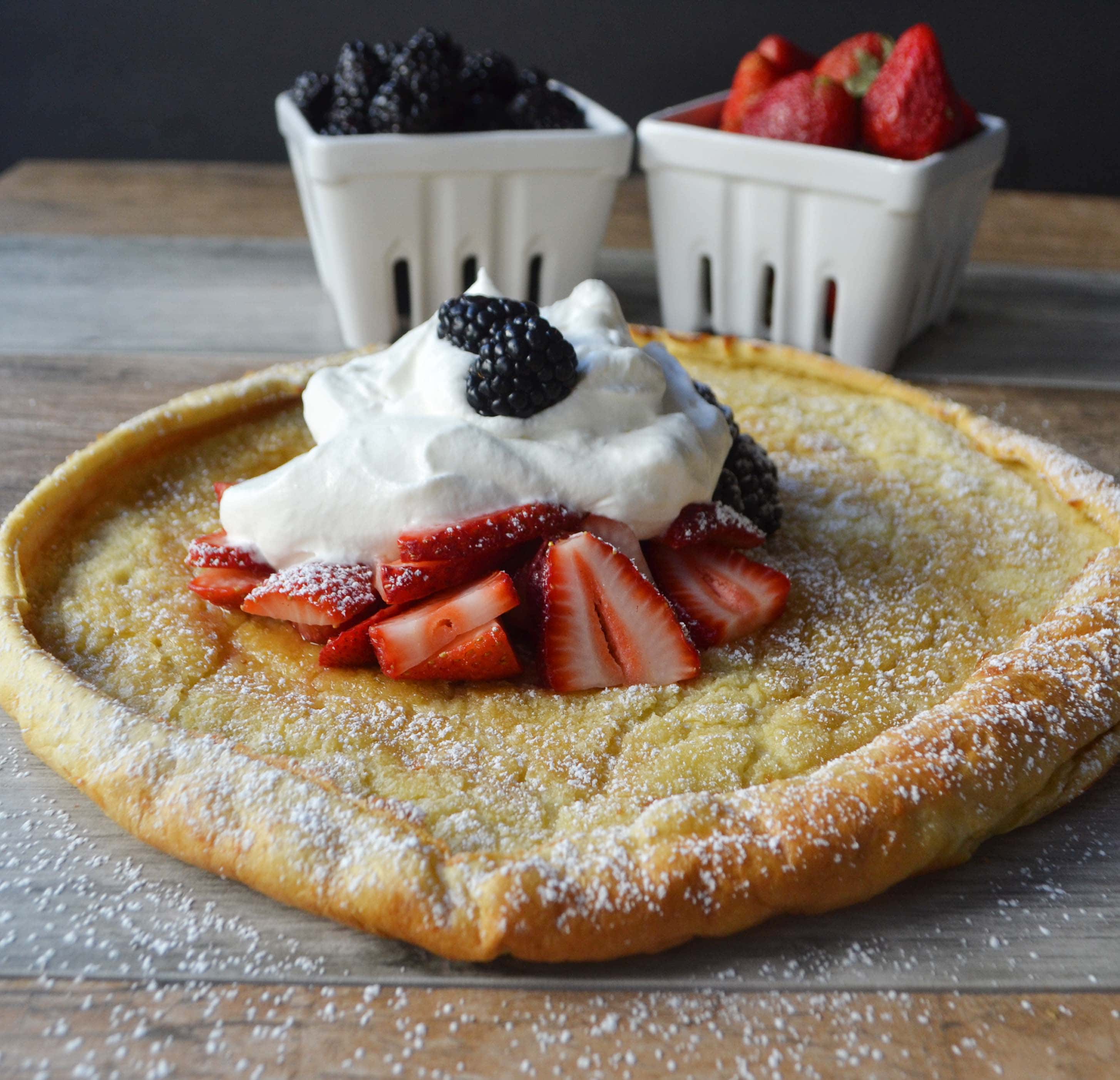 It's so simple. You literally throw in some milk, eggs, sugar, vanilla, flour, and salt into a blender. You whiz it up and pour it into a skillet or baking dish with lots of melted butter (because EVERYTHING is better with butter).

Place the skillet in the oven and watch in wonderment as it rises and puffs. It's like magic...and my kids love magic! 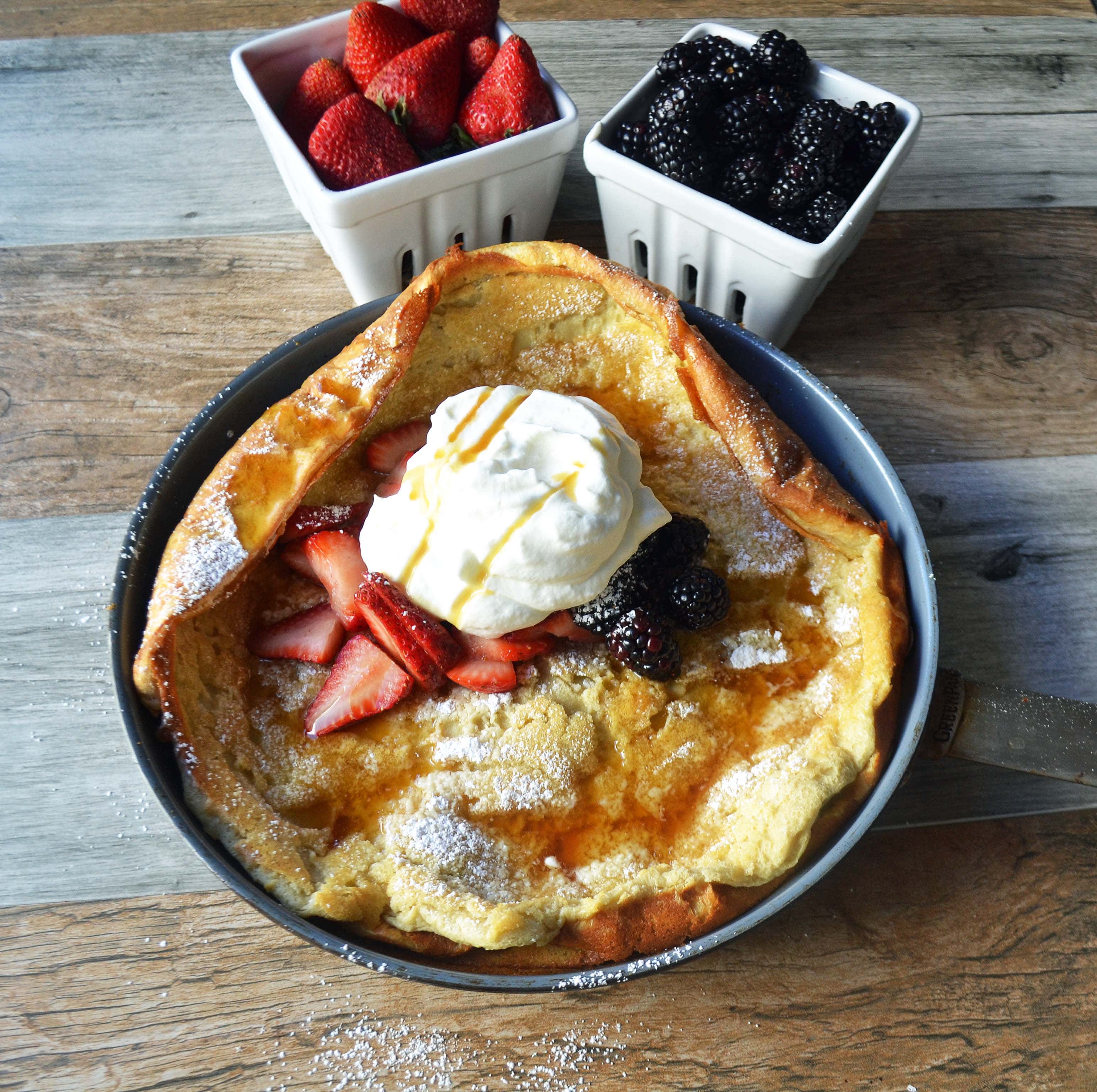 It puffs up so beautifully in the oven and quickly deflates as you remove it from the oven. But you are left with a custard like souffle pancake that melts in your mouth! 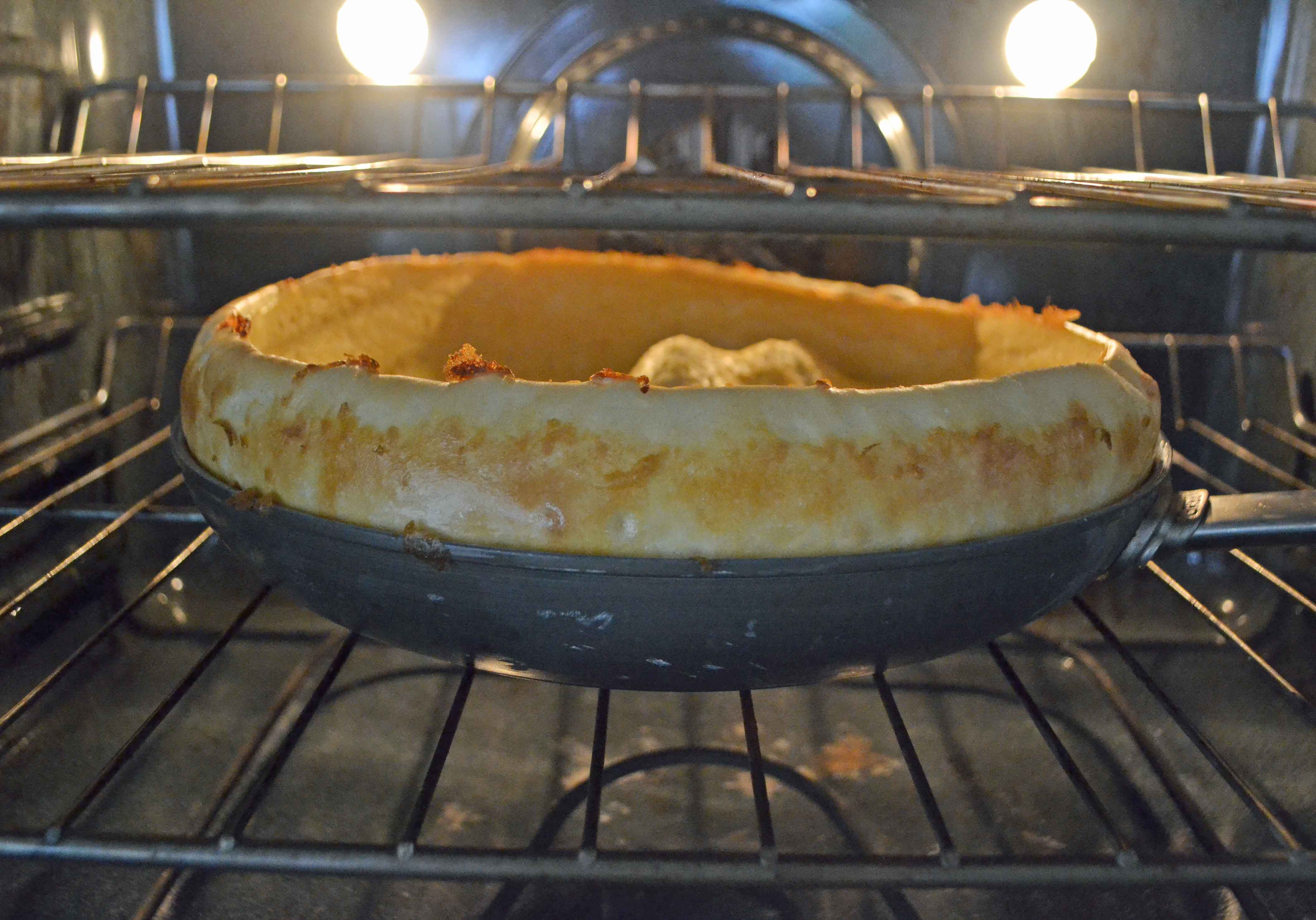 That is it. I told you it was easy. No flipping pancakes. No refilling the waffle maker. It's a pour and go breakfast and a definite crowd-pleaser. It's a cross between a warm, comforting custard and a fluffy pancake. 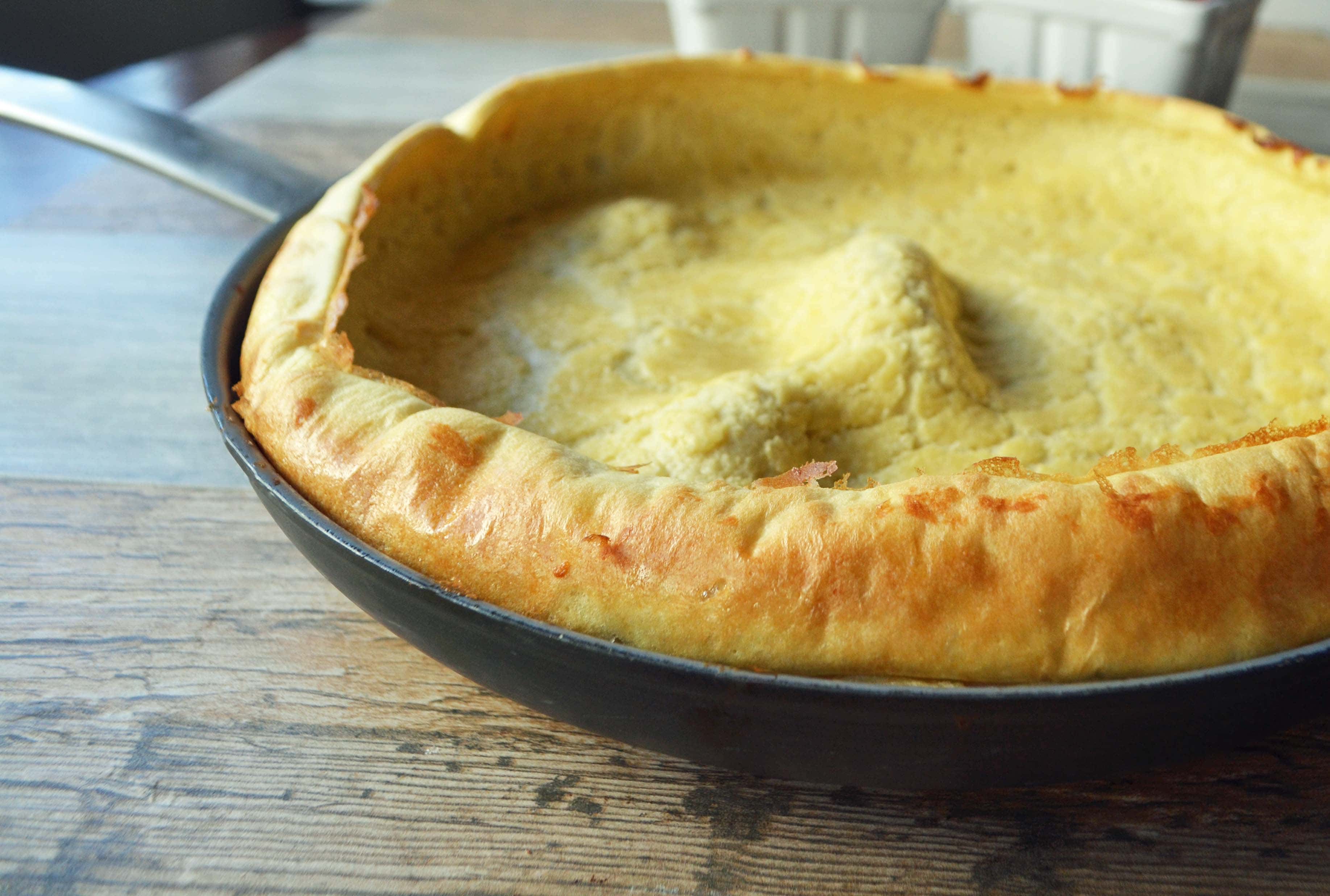 Now the fun part is deciding what to put on this Dutch Baby Puff Pancake. The options are endless. My youngest girl LOVES to dump half of the powdered sugar shaker and a heavy dollop of whipped cream on her piece (she's never met a candy she didn't like). My oldest daughter prefers to keep it light and fresh with hers covered in fresh strawberries and blackberries. 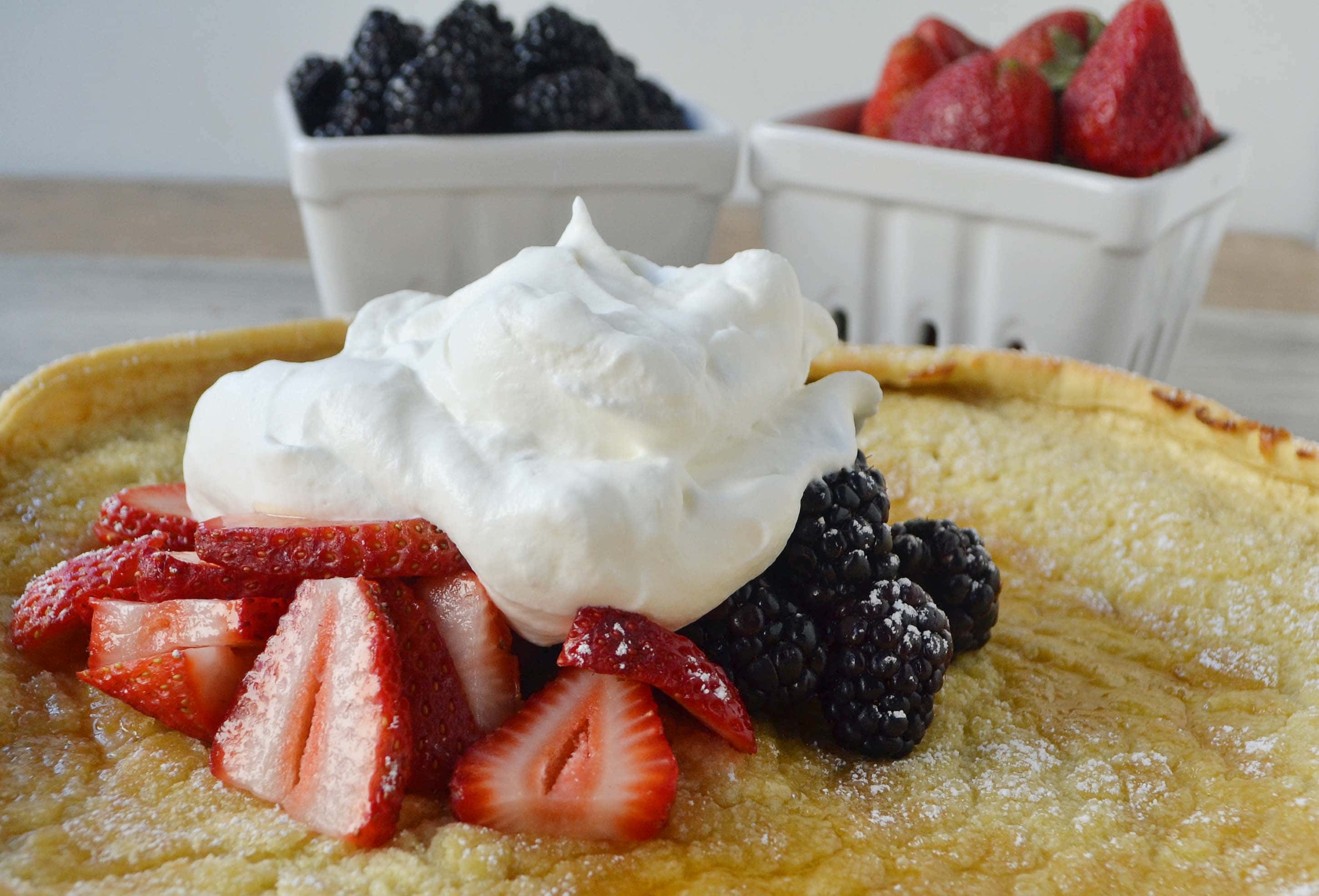 My two boys think that maple syrup rules the universe so they basically let the Dutch Baby Puff Pancake take a swim in syrup. No matter what toppings you choose, this makes an ideal breakfast for a lazy Sunday morning.

How to make the Best Dutch Baby Oven Pancake: 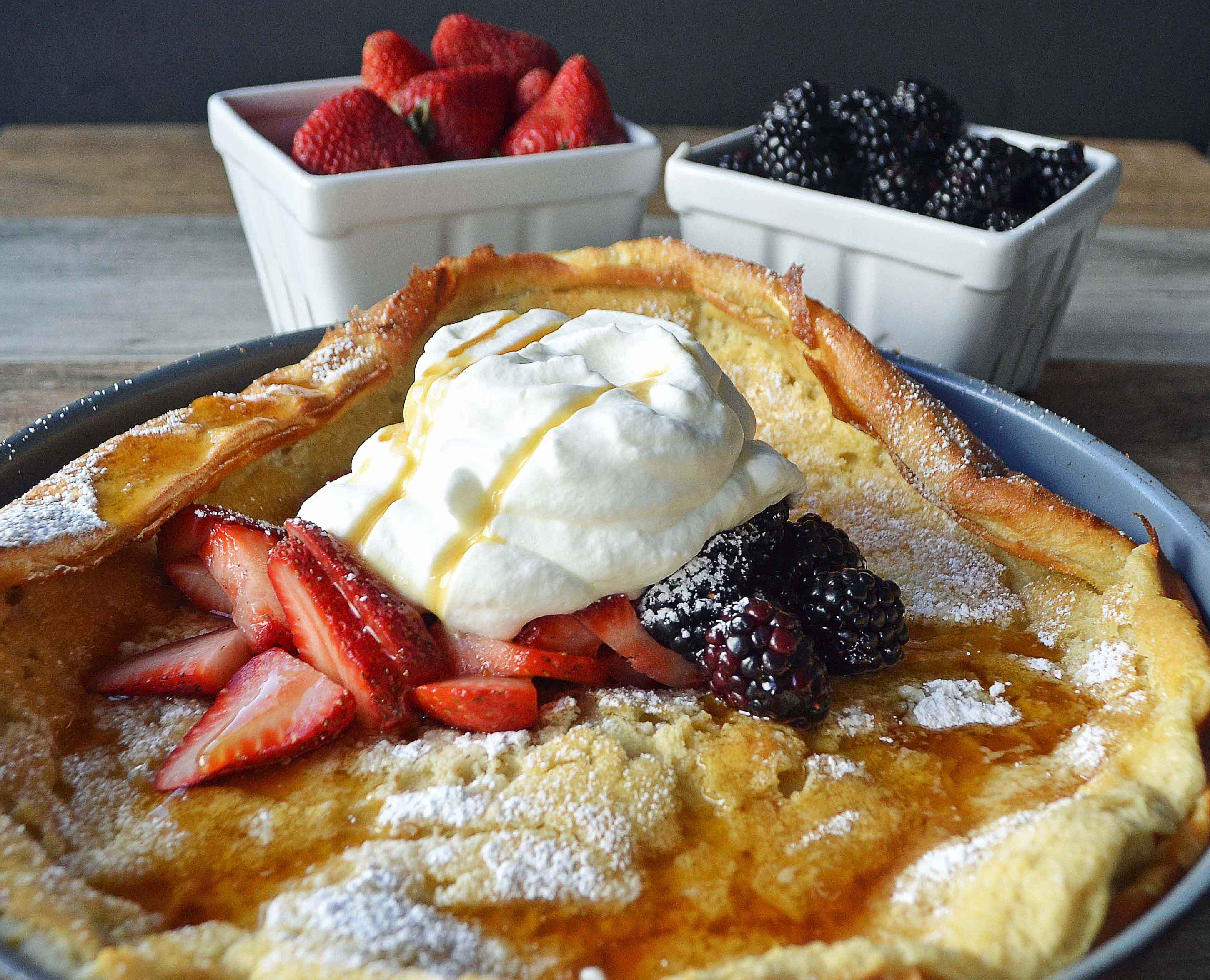 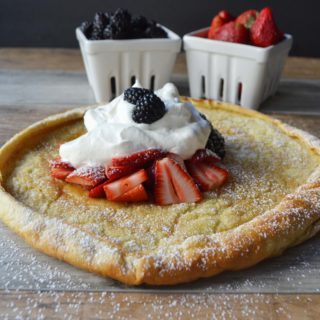 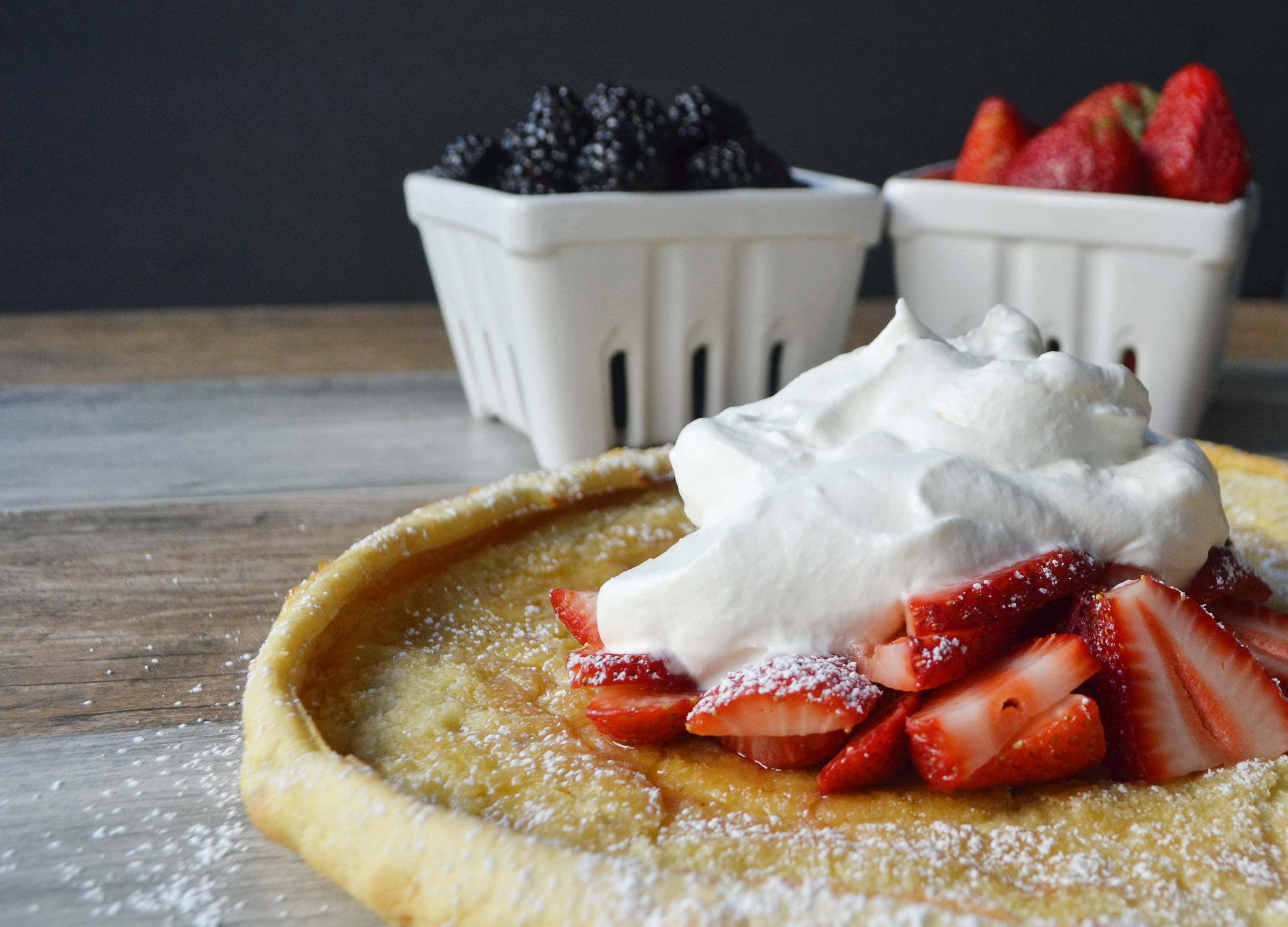 A sprinkle of powdered sugar, some freshly whipped cream, and tart berries on this Dutch Baby Puff Pancake and you look like you have been working for hours in the kitchen. 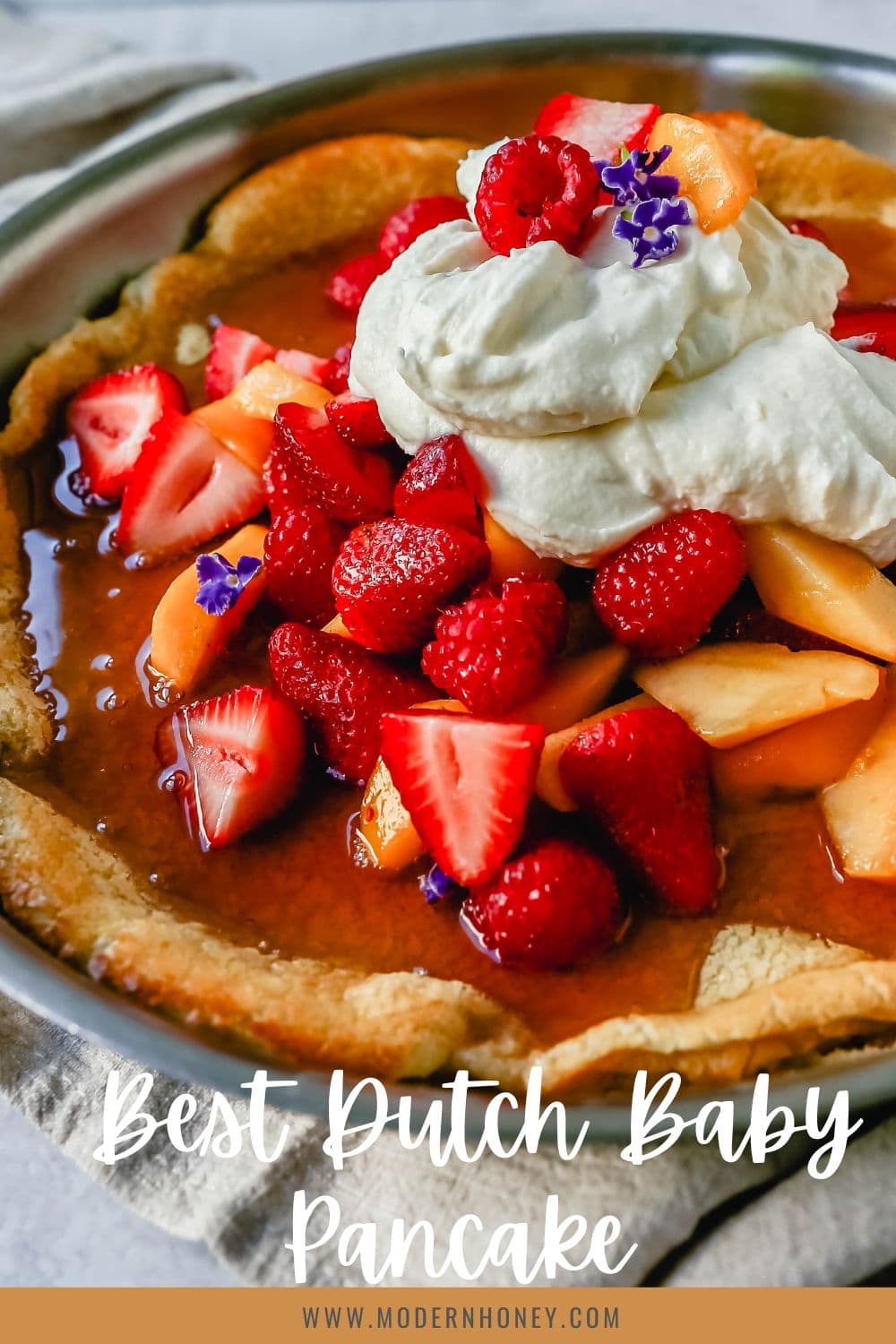